Human activities is the cause of global warming, with greenhouse gases and energy being released to the environment.  In 2020 the rate of human-made energie consumption was ~20 TW (Global Direct Primary Energy Consumption-Published online at OurWorldInData.org).  This rate is comparable to those of geothermal heat released from the Earth's interior (~24 TW from radiogenic heat - Ref. Nature Geoscience, vol 4, September 2011, page 647) and of ~23 TW Residual heat released on account of planetary accretion and differentiation (i.e. ~47 TW = ~24 TW + ~23 TW total Earth’s surface heat flux - Ref. Solid Earth, 1, 5–24, 2010, page 5).

The amount of incoming solar radiation energy the Earth received from the sun (~173,000 TW - Ref. Global Warming: Understanding the Forecast, ISBN: 978-0-470-94341-0 September 2011)  is huge.  However significant parts of it  (~30%) are reflected by clouds and by the earth surface, or radiated to the outer space as long wave infrared energy (~70%).  And of course solar radiation exists only during the day, i.e half of the time.

If an energy rate of 20 TW is captured and sequestered, during the night with the radiative capacity to the outer space fully available, the atmosphere can be quickly returned back to its internal energy conditions that existed during the pre-industrial era.  And during the day, starting with the cooler air and the lower concentrations of water vapor and CO2 in air, the positive feedback loop will efficiently slow down the global warming.

From 1850 to recent years we may note that our air temperature increases, and our energy releases to the atmosphere increase as well: 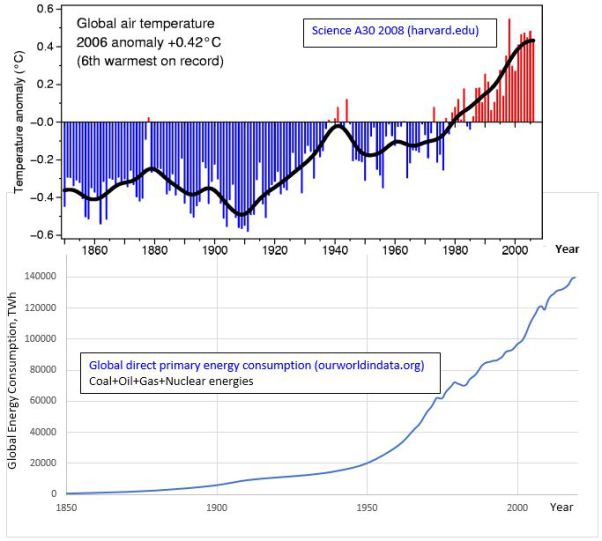 The recent Covid-19 years have shown CO2 emissions have decreased, but CO2 concentration in air has kept increasing.  It is thus expected that CO2 direct removal alone may not be efficient in fighting global warming.  On the other hand capturing atmosphere energy is the natural method to reduce air temperature, while capturing greenhouse gases alone may not resolve all climate related issues induced by each type of non-renewable energy being used.  While coal combustion produces mostly CO2 with some water vapor, Oil and Gas combustion emits mostly CO2 and water vapor. Nuclear energy releases much more thermal energy than the fossil energies. (Refer to Items 1 through 3 here after.  Geothermal energy is also cited although its consumption may not be significant)

Hence a "One Size fits All" solution may not work for this complex Mass and Energy Releases problem.

1 - From the start of the Industrial Era

The combustion of Coal releases Energy and mostly CO2. Some water vapor is also released depending on the initial H contents of the coal.  Low volatile coal for instance may contain only 60 Hydrogen atoms + 2 Oxygen atoms per 100 Carbon atoms.

In addition to CO2 and Energy releases, hot water vapor is also released with the Oil and Gas combustion.  CH4 generated from the Oil and Gas extraction has been contributing to the emission of greenhouse gases.  Fortunately, CH4 may be naturally decomposed in the atmosphere.

With the advent of Nuclear Power Plants, the electricity production from nuclear fission energy releases more thermal energy to the atmosphere per electricity energy unit produced, because Nuclear Power Plant have lower efficiency (about 33%) compared to natural gas power plants (Combined Cycle Gas Turbines can have energy conversion rates over 60%).  When considering the energy used in the nuclear pellets fabrication this efficiency is even lower.

Geothermal Energy consumption is low compared to those of Coal, Oil, Gas, and Nuclear energies, but it also extracts heat from the underground to release it to the atmosphere, along with water vapor.

These coal, oil, gas and nuclear energies released to the atmosphere have constantly accompanied human industrial activities, and have significantly increased since the post WW-II era. So does air temperature.

At ELITELCO we reduce the atmosphere internal energy to sequester CO2 and combat global warming, exploiting the powerful lever that the positive feedback loop offers.  When you expose your car to sun light, the interior of the car will quickly heat up because sun light interacts with the thick metallic top deck and other materials of the car, heating up its interior.   To stop this energy build up inside the car, the most natural operation to do is to switch the air conditioning on to remove energy out of the car.  This is the solution - remove and sequester energy out of the atmosphere -  that at ELITELCO we are adopting to combat global warming, returning CO2 to the oceans and wetlands.

You can extract atmosphere energy and store it far unground, but this operation is very expensive.

You can alternatively use our mild method to reduce atmosphere temperature, which is a more versatile CDR method offering both mass & energy capture and storage.